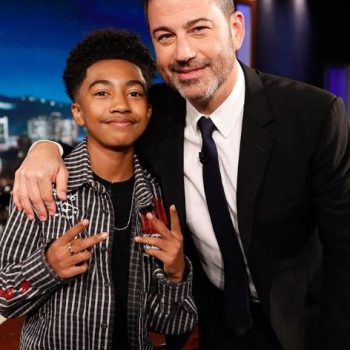 Miles Brown is definitely one of the most talented young men on television today. From dance to acting to music, there is almost nothing that this talented kid cannot due. Best known for his role as Jack on ABC’s Golden Globe-and Emmy-nominated comedy, Black-ish, Brown has grown into an amazing young man with what is sure to be a truly bright future ahead.

Recently Brown stopped by Jimmy Kimmel Live to talk to the television host about a gamete of things ranging from basketball to his new movie, Boy Genius, where he stars opposite Rita Wilson and more. Check out the video below to see the entire interview.

In other news regarding the high school freshman, Brown has recently signed with heavyweight agent/management company CAA. Previously represented by Osbrink, the teen will continue to be represented by BTB Management, Felker Toczek Suddleson Abramson, and ID-PR.